Comments Off on Boundaries & Respect!

Most parents think of boundaries as something they have that children need to respect. Some of us know that we need to be better at communicating them and upholding them – but few have given this crucial aspect of parenting more thought. Boundaries actually exist between all of us – they are what keeps us safe – and able to open up and connect and feel respected. And our children’s boundaries are just as important as ours.  A phrase that has really served me is this: Children and adults don’t have equal power – but equal worth’. When we remember this it becomes easier to see how, as a parent we can still respect our children’s boundaries and be in charge.

Last month brought about two situations that helped me to see more clearly how and why I need to help my kids set communicate theirs;
The first example is this:
I found this letter hanging on my 5 year old daughter’s door to the room she happily shares with her little brother.
’No boys allowed’ 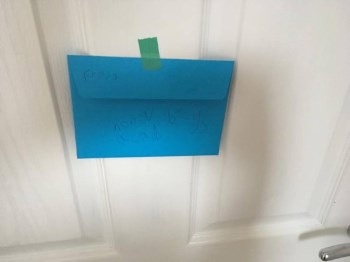 She had a play date – and the excitement at getting to play dolls, and dressing up in fancy dress costumes and be ..well girly – together was palpable. They were giddy, and busy and secretive in a way only little girls can be.
Her brother – only just 3 – obviously unable to read didn’t take long before he unknowingly violated his sister’s demand. Upon entering his own room he was pushed back in a way that would make most adults feel seriously unwanted. And he did.
So what did I do?

As a mum witnessing this episode I sensed the familiar feeling of injustice wash over me. Seeing my little boy alone in the hallway – abandoned by his sister obviously pulled at my heartstrings. But I managed to pause long enough to also take a different view. Why should my daughter not be allowed to carve out some physical space for herself to do ‘her thing’ when all she ever does is share with her little brother. She had tried to communicate this need in the best way she knew by writing a note – and in that moment I knew what to do. My job was to support her to communicate those boundaries – by helping her brother accept them. All this takes when you’re three is a cuddle and a suggestion to come do something else.

…
The other example refers to my recent shopping trip to the supermarket – which – for the record – I try to do without two children in tow. As we queued up at the till I allowed them both to play by the window opposite my till and while I ferociously packed my shopping I noticed a very old lady engaging with them both from her seat on a near by bench. They both looked a bit suspicious at first but my daughter seemed to have clocked that she was kind and well meaning – while in my son’s head she still looked too much like the stereotypical image of witch with a scarf round her head and a long nose. He was petrified and let out a scream whenever she reached out to touch him with a pointy index finger.
Now all of you parents will now that once you’ve started loading your shopping into bags – you can’t afford to take your eye off the ball for more than a second before chaos at the receiving end ensues. So when my son sought refuge with me – I’d be lying if I didn’t think this was an inconvenience. But the dear old lady didn’t stop. Oh no – she got up and shuffled nearer and with her pointy finger out to get Miller – she came up to us – Miller now sitting on top of my head for shear fear that this old lady was going to take him.
It would be so easy to ask Miller to CALM DOWN – remind him that there’s nothing to be scared of and that she means well. But I settled on a different approach. Miller needed back up. Adults rarely follow after once kids run away petrified – so it was my job to tell her politely but in direct terms that she would have to stop.

As a parent we get confronted with these types of scenarios on a near enough daily basis. And I am by no means always able to respond with the insight the above examples demonstrate. It wasn’t till started reflecting on what boundaries are, how do we communicate them, how do they serve us – and is everyone worthy of having them respected. The answer is YES.
Boundaries go both ways in the parent / child relation.

The helpless baby communicates boundaries when we engage with them and say ‘gooooo gooo gaaa gaaa’ and then they turn their head. (They have had enough)
When your 5 year old who normally loves being tickled suddenly says stop and whinges and cries.
When your teen gets mad when you enter their room without knocking.

And the most effective way to teach our children to respect boundaries – is when we respect theirs.
So instead of saying ‘ aw come on – let me tickle you – why are you suddenly so moody’ we say – ‘okay honey – you don’t want that right now. I’m sorry’.

The good news is – we need not give our children lengthy moral reasons for why they ought to respect us and others. The feeling it gives them to be shown that their boundaries matter – will motivate them to offer the same respect in return. When we lead by example we are powerful role models

Get Through Separation with Friends!

Special Time with your Child IS Possible!

When the jeans don’t fit - Change them! New WHO

Sometimes we just need to switch things up! To add

Have you ever noticed that it’s easier to meet y